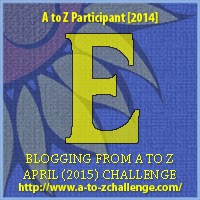 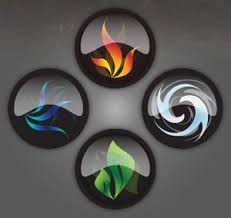 ELEMENTS --  These are Earth, Air, Fire, Water, and most times Akasha, which is the elemental spiritual power throughout the universe.  Each of these elements are representative of specific type of magic, a direction, and many other aspects of Wicca.  Earth and Water are both under the Goddess and Fire and Air the God.

EARTH -- One of the four Elements.  It's compass direction is North and is associated with the color green. Salt is the one of the most commonly used symbol for Earth.  It is feminine in nature and is receptive in nature.  Herbalism, stones and gems, and most anything dealing with Earth are part of Earth magic. Fertility magic falls under this element. The Pentacle is the tool associated with this Element.

ESBAT --  (Pronouced Ess-bot)  Esbats are different from Sabbats.  It is a ritual (and gathering if one is in a coven) that does not involve a holiday like Beltane.  Many practice esbats at the full moon when the Goddess is at her full power, but esbats can be held at the moon's other phases as well.

Esbats are more 'working' ceremonies.  Depending on the moon phase, specific goals like a healing ceremony are performed.

Cakes and Ale is a ceremony where food and drink is shared between the solitary practitioner and the Goddess, or the coven and the Goddess.  It is an offering of appreciation to her.  I say food and drink because the libation and food are flexible.  They can anything from wine and cake literally or cookies and fruit juice.


EVOCATION -- This is a term sometimes confused with Invocation.  Evocation is when a spirit or deity is summoned/asked to join the summoner/s into a circle.  Basically it's saying, "Hey, hang out with us."  Usually it is the Goddess and God called to empower a circle even more.

Email ThisBlogThis!Share to TwitterShare to FacebookShare to Pinterest
These are what its about: A To Z Challenge, blog hop, elements, pagan, ritual, wicca