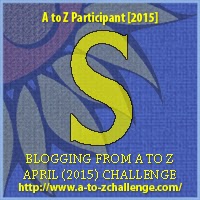 SABBAT -- Sabbats are the name for the eight major celebrations in Wicca and Pagan religions.  They consist of the Greater Sabbats and Lesser Sabbats.  The Greater Sabbats are Samhain, Imbolc, Beltane, and Lughnasadh.  These four are the four fire festivals from Pre-Christian times and are when each season is at its peak of power.

SIGIL -- Sigil is defined by Merriam-Webster as:


noun (sig·il) (si-jil)
1: seal, signet
2: a sign, word, or device held to have occult power in astrology or magic

It comes from the Latin and means a mark, sign, or seal.

In Wicca, sigils are said to very powerful and are designed with elements that have specific meanings. They sometimes start as a sentence of intent and are created specifically to will it into being. They can be inscribed onto objects like candles, talismans, amulets as well as other things.  They can be used for many purposes like protection.

Sigils can be abstracts that are very personal to the creator and can have no meaning to anyone else, or they can be made of other symbols put together or even letters from the sentence of intent.

Historically sigils have been the equivalent of the true name of spirits and were used as such in the medieval magic.  Some pratictices involved summoning angels and demons through their sigils.

Many other cultures have used sigils like the Hebrews.  Their word is segula has a few meanings including talisman, folk remedy, safeguard, or superstitious action.


SUN --  The sun has been worshiped since man walked the earth.  Every ancient culture has some form of sun worship.  The Egyptian Ra, the Greek Apollo, the Celtic Lugh, and the Japanese Amaterasu are just some of the gods and goddesses associated with the sun.

For Many Wiccans, the Wheel of the Year is a representation of the eight Sabbats that follows the God's birth and death as the sun.  Within the Wheel is the sun cross, which divides the Sabbats into their quadrants.


SKYCLAD -- This is the proper term for ritual nudity.  It has absolutely nothing to do with anything sexual.  It is not a requirement at all.

This is the time when the Goddess is in Her third aspect, the Crone.  She is symbolized by the waning moon.  It is said that the God dies before He is reborn at Yule, the Winter Solstice.  It is when those who have gone before are remembered.

SATURDAY --  This day of the week is named for the Roman god Saturn.  He is the god of sowing seeds and later of time.  He was once the supreme ruler of the gods after his father and before his son, Jupiter.  He is equated with Cronus in Greek mythology.  His festival, Saturnalia, fell on December 17.  It was the most famous of all because this festival was the IT festival.  Slaves were free to speak and sit with their masters as well as be served by them.  Gifts were exchanged, which may have influenced Christmas.  A 'king' was elected by dice game and was given the power over his 'subjects' and could request them to do ridiculous things.

Saturn may have roots as an underworld god that held sway over funerary rites.  this can be surmised by his first consort, Lua.  She was a goddess that soldiers sacrificed captured weapons to avoid misfortune.

SUNDAY -- Sunday comes from the Latin dies solis.  It means day of the sun.  The Roman god, Sol, was similar to Helios. In many of the Romance languages it has been changed into a word that translates to "the Lord's day".  Also, to note, that in Norse mythology, the sun was a goddess called (shall we guess? That's right!) Sól!  Her brother was the moon. They were chased across the sky by wolves until Ragnarok.

Email ThisBlogThis!Share to TwitterShare to FacebookShare to Pinterest
These are what its about: A To Z Challenge, blog hop, day, Halloween, history, holidays, pagan, wicca