A to Z Challenge. CHAPTER SIX -- ATTACKED {PG-13 for gore and violence} 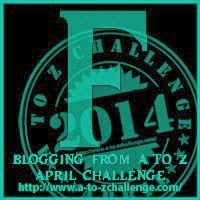 Nándor stared at her, his entire body tense.  “What are you saying?”

Ruya closed her eyes and hissed out a breath.  She sat on the log, clutching her knees with her hands.  Her gaze rose to his.  “It happened just as the Doyen came to escort me to dinner.  The divination was uncalled and came without warning.  The legendary city glowed white in the darkness.  I saw it fulminate in purple fire as the earth shook the ruins.”  Her breath hitched.  “Ahriman stood amongst the flames.  He laughed as something rose from the inferno.  Something ancient.  Something evil.”  She shuddered, rubbing her arms as if to keep a chill away.

Nándor studied her white face.  She was terrified but determined.  “That’s what you argued about when I saw you leave the table.  Why?”

“Yes.  He thought it just a fey image since augury takes preparation.  He did not want to give you falseness.  He does not know that I have divined like this since I was a young girl.”

“And so you left the Aerie to press the issue.  He knew you would meet up with me and tell me anyway.”

Ruya nodded.  “Yes, and that is why I must come with you.”

Nándor’s hands clenched.  “No.  You’ve told me what you needed to tell me.  I know where I can find him.  Go back to the Aerie.  You don’t belong out here.”

Ruya shot up, closing the distance in angry strides.  Her fulgurant eyes bore witness to her ire.  “Nándor Eldalvey, do not presume to give me orders.  You will take me with you.”

The fiat set his teeth on edge.  “You are not in command now.  I am not your lapdog to jump when you tell me.  Go back to the Aerie,” he bit out, pointing toward the mountain.  “You’ll only hold me back.”

Ruya watched helplessly as he walked away.  “Wait!”  When he stopped, she took advantage and went to his side, touching his arm.  “I need to go.  It is my future.”
Nándor looked over his shoulder at her somber expression.  “Your future?”  He faced her.  “What do you mean?”

“Augurs cannot divine their own fatidic path.  It takes another to see.”  She bit her lip.

This was the first time he had ever seen her unsure.  “What did the augur see?”

“Purple fire.”  Her voice was a wispy thread.  “My future lies in Phaeris.”

His hands dropped to his side and looked away, thinking.  His brows furrowed and he gave a shake of his head at his stupidity.  “Gather your things.”  He watched as she did just that, a bad feeling weighing him down.  “I’m going to regret this.”

Only Nándor admitted he was wrong.  In truth, Ruya was quite capable.  She knew how to do many things that he thought her life in the Aerie had not taught her.  She knew how to lay a campfire as well as cook game without becoming squeamish.

They camped that night on the borderlands of Lakelin Glades.  They would have to cross the treacherous fen to reach the river delta and the ferry that crossed Loch Hyern.  He commented on it when she gutted the fish he had caught.

Ruya laughed.  “I did not always live at the Aerie.  My mother and father ran a farm.  I remember the simplicity of it despite the work.  I was ten when my parents sought help for my gift.  Doyen Cem came and tested me himself.”  She looked off across the rippling water.  “I left with them the next day.”

The wistful tone had Nándor kneeling beside her.  “I’m sorry.”

Ruya turned to face him, her face breaking into a grin.  “Do not be sad.  The training I received saved my sanity.  Without it, I would have lost myself to the visions.”

Nándor watched as night left the sky in the east.  He stood under one of the trees outside of camp.  Tesni’s soft snort was his only warning as three men appeared from nowhere and attacked their camp.

Ruya shouted as two of the men grabbed the horses.  She jumped on the third man, beating him with a fist.

The man threw her off and fleered when he saw it was a woman.  “Well, well, what do we have here?  A little girl alone?  What a treasure to find in the Glades.”

He knew what flagitious thoughts ran through the man’s head.  His blood raged as he drew his dagger and closed the distance to camp.  On silent feet, he positioned himself behind the man nearest him.

A swift blade killed the man before the other two noticed anything was wrong.  Like a phantom, he was long gone before the body fell to the ground.

The leader yanked Ruya from the ground and placed her before him.  He held a razor sharp scythe against her.  “Come out or I will slice her.”

The sun hinted its arrival as the standoff arose. Each man watched the other.

“Drop the knife,” the man countered.

Nándor shrugged and did. “Now let the girl go.”

With depraved eyes, he shook his head.  “Nah.  I think I’ll keep her.”

Again Nándor shrugged.  “As you wish.  She was a burden anyway.”

The scythe dropped to the ground.  Ruya turned and a squeak wheezed out of her when she saw why.  A throwing knife protruded from his left eye.  She sidestepped swiftly and backed away, her body quivering.

Nándor rushed forward and took her by the shoulders.  “Are you all right?  Are you injured?”

He released her and gathered their things.  “Come on.  There may be more of them.  We need to leave now.”

She stared at him for a second before joining him.