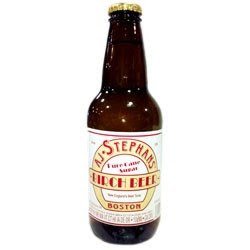 A J Stephans Birch Beer is the next soda on my list.  It came with a simple brown bottle with a label as unassuming as it can be.

I opened the bottle and the smell was okay.  It was sort of like root beer.

Much to my suprise the soda itself was transparent like 7UP or Sprite, but it did have a tinge of brown to it that i would call it a very pale tan.

As for the taste, the only way I can describe it is that it tastes like root beer without the root.  I have no idea if that makes sense.  I guess it has the basic flavor of root beer, but it doesn't have the bite that root beer has.

It was an okay soda. It came up to the mid I liked it scale.  Not the greatest but definitely not the worst tasting thing out there.