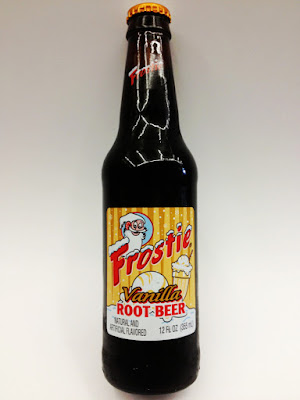 Frostie Vanilla Root Beer was the second choice my sister made when she was here for 4th of July weekend.  The first being Coco Fizz.(What can I say? She's a chocoholic.)

So this one smelled like root beer with a hint of vanilla.  It was very promising.

I poured all three of us some.  My mom thought it was too sweet.  My sister approved.  I thought it tasted as if it was a root beer float.

The vanilla flavor was big enough to make it seem as if there was a scoop of vanilla ice cream hanging out in the bottle.

My only complaint about this soda was that the root beer part lacked bite. I prefer my root beer to stab my tongue with its flavor.  This particular root beer was a palid version. The flavor was there, but not like it is with Barq's.

My mom thought it was okay but not great.  My sister liked it a lot.  I thought that it was pretty much a winner.
A brain ooze by djinnia exposed to the world at 6:30 AM